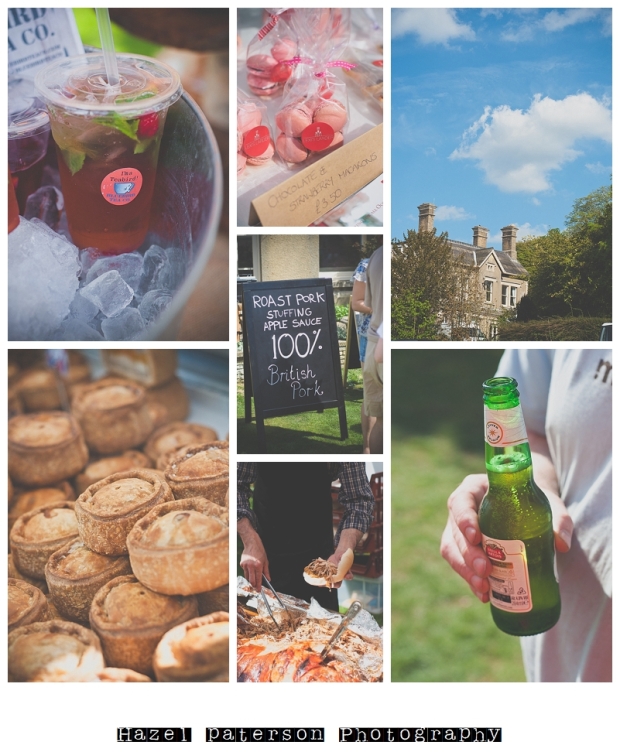 The perfect antidote to Sunday’s Melton’s Cheese fair at the cattle market was the very first Graze The Vale food festival that took place on the Bank Holiday Monday on the Belvoir (pronounced beaver *chortle*) Castle estate. Glorious sunshine and the beautiful location of Vale House were home to artisan producers of cakes, pies, chocolate, teas, organically reared meat and other culinary delights.

I took Glen along to help put up the Great Food Magazine gazebo as Matt the editor was away sunning himself on holiday, even Glen had a brilliant day out which is no mean feat for a sun shy grumpy old man 😉

I was over the moon to see Ian and Nic from Heartland Pies  which meant breakfast pies were in order. Heartland Pies are the only Melton Mowbray pork pie maker to use outdoor bred pork, their farmer is just up the road who rears all their pigs then Ian butchers them himself and then joined by wife Nic and sons Luke and Adam they turn them into wonderful pies. You’d be surprised how rare this is when it comes to Melton Mowbray pork pies who tend to use intensive farming systems for their pork, I long for a free range Melton Mowbray pork pie to come onto the market. Glen, who doesn’t even like sausage rolls, will happily snaffle up a couple of Heartland jumbo rolls which meant it was a porky breakfast for both of us. WIN. 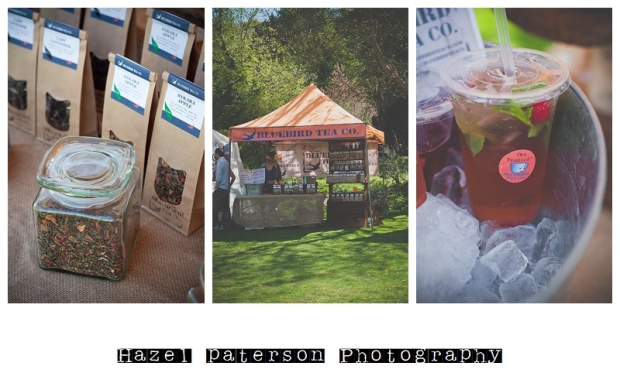 Next to Heartland Pies was the Bluebird Tea Company who I rather fell in love with. They hand blend black, green, fruit, herbal and flower teas in all manner of incarnations. I bought their caffeine free rhubarb and custard and that was it for me, hooked. They are a young couple who are passionate about flavour and quality and even run a tea tasting club where you can get different teas posted out to you every month.

The wonderfully exuberant Silvio was there with his Italian hog roast, Roast Events, this my friends was also really rather bloody brilliant, he marinaded the pig in herbs including fennel, garlic and onion and gently slow roasted it overnight, the stuffing was cooked in the perfumed rendered roasting juices and the crackling was crisp and addictive, yep, more aceness, more piggy delights. 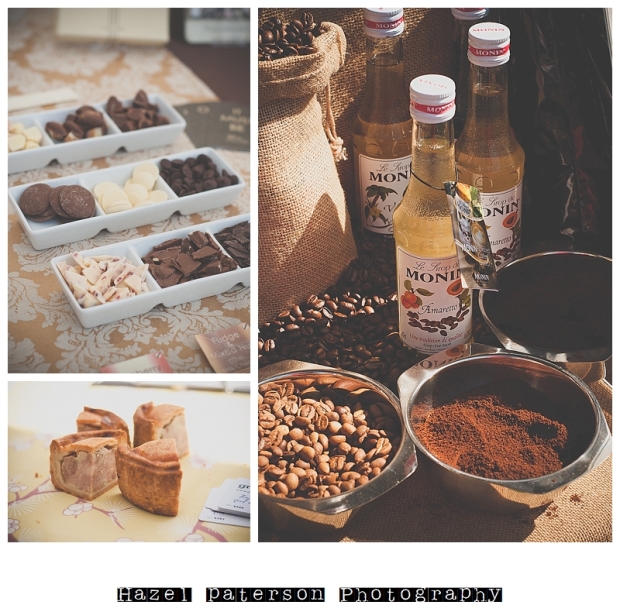 Not content with pies, teas and Italian hog roast I headed over to see Jerome who along with his wife run With Chocolate just up the road in Eaton. They source, temper, blend, design, package and produce the most heavenly chocolate, their banoffee truffle bar is a thing of absolute bloody beauty.

Picks Organic were there selling gorgeous meat reared on their farm or for something from a bit further afield there was kangaroo, elk and crocodile from their neighbour to get stuck into.  Thaymar ice creams were also there with their cute little van as were Sophie’s Flower Company and The Waltham Deli selling Hambleton Bakery pecan buns (AMAZING) and other hardcore indulgent delights.

It was a really chilled out, friendly festival, accompanied by great music (Edith Piaf and other sunshine happy music tinkled away in the background) and ace visitors and stall holders, the only thing missing was a beer tent but Lara is on the case for next year. Once the day was over and just us stall holders remained packing things away, Lara told us the news that not only had Silvio put a couple of legs of lamb in the hog roaster for everyone but she also broke out the ice cold beer and champagne from her own fridge, I bloody love this woman! As we all drank ice cold beer in the hot sun and chatted about what a fab day it had been I realised that it had been something really quite special, bring on next year 🙂

Last weekend saw the return of the Melton Mowbray Cheese Fair (I’d link to the website but it still only has a list of last year’s exhibitors), it’s actually billed as the “artisan” cheese fair but many of the exhibitors could hardly be called artisan, Long Clawson for example makes over 6,700 tonnes of cheese a year and I’ve worked in one of the other cheese factories that were there and they are about as far from “artisan” as you can get.

Artisan: (from the Oxford English Dictionary)

There were much fewer cheese exhibitors this year, many of the artisan producers that were there last year were absent this time round bar a handful, but with the term “artisan” being used so loosely to include huge cheese manufacturers I don’t really blame them for wanting to distance themselves from something that devalues the true meaning of the word so carelessly.

I went along on the Sunday and was pretty shocked, not by the lack of small producers which I’d kinda expected but by the sheer rudeness of so many of the show’s visitors. It seemed entirely appropriate that it was held in a cattle market as people paid their £1 entrance fee many pushed and shoved and grabbed greedily at samples before just walking off. Everyone I spoke to in the days following the event said the same thing: “we saw people literally grabbing the knives off the tables and hacking lumps of cheese off from the producer’s tables and then just walking away.” It was depressing. Full credit to the traders though who I think must have all taken some super smiley pills because they were all incredible gracious and friendly in the face of such rudeness. I would have had people leaving my stall with toothpicks protruding from their eyes and hands after several hours of this so huge respect to all of them.

I gave up on moving around the stalls after my desire to whip out a cattle prod grew too intense and opted for a pint of Natterjack cider to calm me down, then an ale and watched the Melton Ukelele Orchestra who were absolutely ace, they played Paint it Black by The Rolling Stones and it totally made my day.

Things had quietened down a bit by then (perhaps the morris dancing had something to do with it) so I headed round the stalls to talk cheese. It was great to see David from Sparkenhoe there again (middle left on the picture above), THIS my friends is what Red Leicester is meant to taste like, its nutty, creamy, unpasturised and made on their farm using their own herd. Unsurprisingly the hands down flavour winners of the day were the unpasturised (raw milk) cheeses, of which I bought about 8 different ones (Keens cheddar, Chorlton smoked and unsmoked Cheshire, Laverstock buffalo mozzarella, Teifi’s Celtic promise, and 2 from the same producer whom I can’t remember the name of) which were all wonderful but my favourite of the day was Kent’s Winterdale Shaw which is Britain’s first carbon neutral cheese. Next time I’m down in Kent I’m going to head over to see them, they are a lovely family making great cheese using their own cows, just the kind of people and cheese that make this country’s food heritage something to be proud of.

There aren’t many photos to accompany this post as I pretty much just wanted to get out of there. It’s a real shame as it has the potential to be a good food fair, just drop the word Artisan or ONLY have true artisan products, get out of the cattle market and into a field with some marquees, have lots of other micro breweries, cider makers, artisan bakers, pie makers and celebrate food that is made with love and care and not forgetting MUCH more of the ukelele orchestra 🙂

Get in my face

Marshmallows have always been something thats only exciting for me if they are shoved onto the end of stick and cremated over a fire, preferably somewhere on a lovely beach (this hardly ever happens) or in someone’s back garden after an afternoon of drinking around their BBQ (much more likely to happen).

So when I was at The Melton Country Fair the other week and found the Sugar and Twine stall complete with (now empty) plates of homemade marshmallows I was really intrigued, and pretty gutted that all the marshmallows had been snaffled.

As it happens though, thanks to the wonderful world of Twitter, just a few days later a truly marvellous thing happened. There on my kitchen worktop were two bags of marshmallows: an elderflower and vanilla one and a lemonade one, happy days!

I love it when a new food experience knocks me for six. I really couldn’t get over their incredible fluffy melt in the mouth texture, truly a million miles away from the bags you get in the supermarket. I kept looking at this little fluffy square in my fingers as I realised that basically everything I previously thought about marshmallows was wrong. Marshmallows, proper ones like Sugar and Twine’s, are out of this world good! I’m definitely going to have a go at making them myself but in the meant time thank god Sugar and Twine are not only local but that I can buy online too!