There is SO much more to Melton Mowbray than pork pies and stilton cheese, not that you  ever hear about all the other wonderful producers around here.  The town’s PR people concentrate so heavily on these 2 products and just seem to ignore the rest, and for me it’s “the rest” that actually makes Melton so special. Don’t get me wrong, I love a good pork pie (preferably with lots of trotter jelly, a good crust and plenty of black pepper) but you only hear about one shop that sells them in a town where actually, each different butchers sells a different pie.  My Butchers (Derek Jones) sell Baileys pies who were featured in Jamie Oliver’s Channel 4 show Great Britiain which highlighted Britain’s best producers. Another butcher sells Walkers pies who actually won the best Melton Mowbray Pork Pie category at the 2012 British Pie Awards (also held in Melton Mowbray).

I took Ben Jackson from BBC Radio Leicester along to the farmer’s market near my cottage to show him how fantastic not only the food scene in Melton is but also how vibrant and wonderful our Tuesday market is. Its’s a real farmer’s market where you can buy a herd of cattle, a flock of sheep, some wild boar and pheasants along side your bread, home-made butter, veg plants for the garden, home cured bacon and antique furniture!

Maria’s butter and boxes of local mushrooms and game birds

You can hear our trip around the market here, it is 1 hr 39mins in from the start of the programme *WARNING: a courgette plant was harmed in the recording of this broadcast*

I then took him down through the town market to the Fish Man who travels from the Grimsby fish market every Tuesday morning and has the freshest, most beautiful array of fish and shell fish. He had some wonderful wild sea trout from Scotland and plenty of bright green salty samphire which just had to be bought!

I then took Ben to Coco Cakes to meet “the Cake Lady” (also known as Jane) who makes the best chocolate fudge you will EVER taste, sadly she didn’t have any ready though as she had literally just popped it in the fridge to set – sad times.  Luckily her shop is about 20 seconds from the end of my lane though so fudge crisis averted.

A trip to my favourite butchers Derek Jones for some of their incredible home cured and smoked bacon and a few slices of their own haslet and it was time for me to head to work for a day in the kitchen, and Ben to head back to BBC Radio Leicester fully laden with wonderful food goodies, and not a pork pie or piece of stilton in sight. 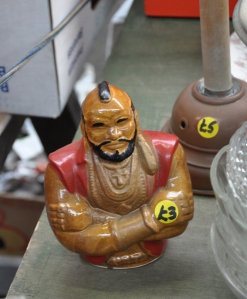 He ain't getin on no plane FOOL!

I am incredibly lucky to live just a few minutes walk away from the truly wonderful Melton Cattle Market which hosts the most fantastic Farmers Market every Tuesday and during Game Season you can take your pick of wild meats as well as all the usual livestock, local veg, homemade cakes, pies, breads, antiques, chicken coops, old bikes, shotguns, Landrovers the list goes on and on! There really is not a lot that you can’t buy at this Farmer’s Market and its one of the reasons I’m always so excited to go.