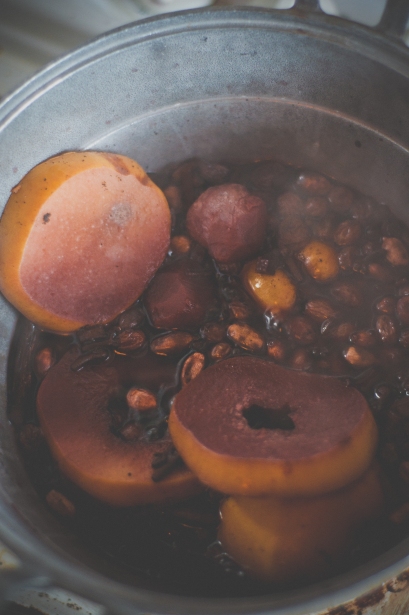 I’m currently sipping on what is without a doubt the best mulled wine I’ve ever tasted. On Friday night after the Radio Leicester Christmas Food phone-in (you should definitely listen to this on Christmas morning, it’s 2 hours of food chat and festive songs – YES!) we headed back to presenter Ben Jackson’s house for food and drinks. As soon as we arrived he said “right who’s for mulled wine?” ME ME ME!

This was no ordinary British mulled wine though, Ben presented us with a warm glass of Swedish glögg which he had poured over sultanas and whole almonds. I was blown away. It was straight from a bottle bought over from Sweden and it kicked any of our British mulled wines’ asses on flavour without batting a Swedish eyelid.

Ben very kindly gave me a packet of glögg spices that he’s had in the cupboard “for about 4 years”. The Glögg packet contains lots of whole green cardamom pods, loads of cinnamon bark, whole cloves and dried bits of citrus peel. The cardamom is key, lots of it but kept whole in their green pods.

Feeling the need for festive cheer I had a scout for some ingredients in my cupboards to throw in too. Normally I add orange but I didn’t have any, what I did have lots of however was plenty of quinces and lots of vanilla pods. The resulting boozy concoction has blown me away and even Glen, who hates all wine, really likes it (the highest praise indeed). Forget putting sliced oranges in mulled wine, if you can get your hands on the heady scented quince then throw it in there and never look back!

Simply gently warm everything together on the lowest heat (with a lid on) so everything has time to infuse. Ladle through a tea strainer into glasses that have a few sultanas and whole blanched almonds in the bottom.