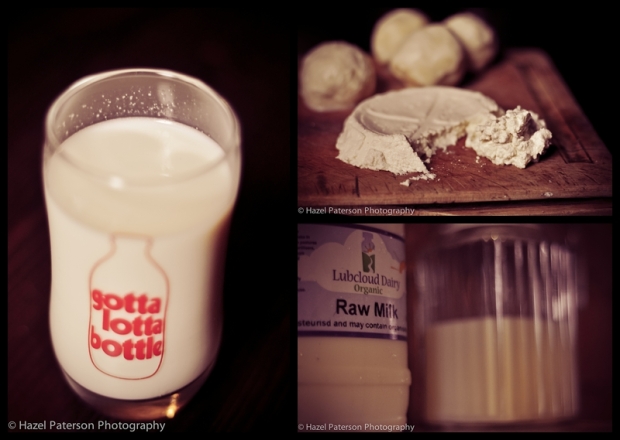 People are divided over raw milk but I am a big fan and I am lucky enough to live near to Lubcloud Organic Dairy who not only sell raw milk but also have chosesn not to homogenise any of their products.  When I was little I had to be quick in the mornings getting to the milk bottles on the doorstep. The birds were wise to the sight of Malcolm, our milkman back on Anglesey, and would peck through the foil lids to get to the cream that had risen to the top of the bottle.  I always used to sneakily pour a glass of that amazing creamy milk before putting it back in the fridge as a reward for being good and bringing the bottles in!

These days milk is homogenised as standard, so the fat is evenly distributed and not only don’t you get that wonderful creamy layer at the top of your pint but you also don’t get those glorious little dots of fat on the inside of your glass.  Personally I think that the taste really suffers as a result of both pasteurisation and homogenisation so it’s no contest for me when it comes to flavour. 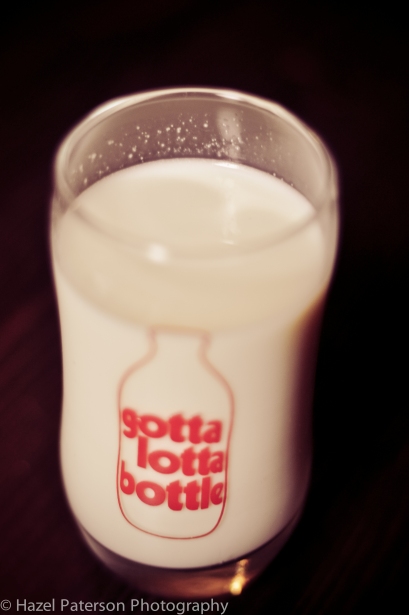 tiny dots of loveliness around the inside of the glass

Raw milk from an organic herd really can’t be beaten for flavour so I decided to see how many things I could make from 2 litres of the stuff.  I started with mozzarella…

A quick look around the internet and I found Hugh Fearnley Whittingstall’s recipe for mozzarella and set to work.

The curds and whey quickly separated once the citric acid and rennet were added and the curds removed and left to drain. I should point out that this really does make your house smell like baby sick and it left me feeling quite dubious that something nice could be made from something that smelt so awful.  Nevertheless the curds were removed with a slotted spoon and left to drain for a bit in a sieve.

I wanted smallish balls of cheese, so the mozzarella curd was thickly sliced, put back into the hot whey then stretched and folded back on itself a few times before being rolled into balls and plunged into ice water. 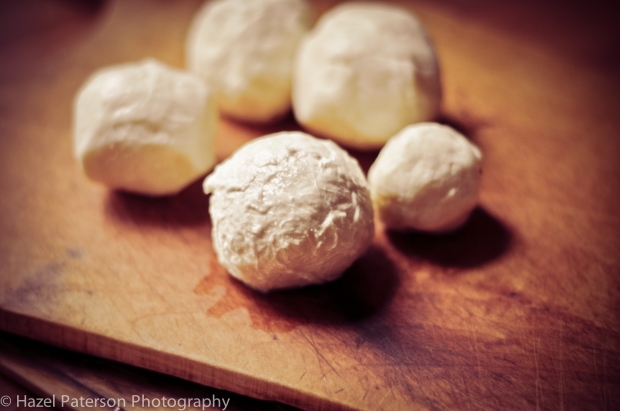 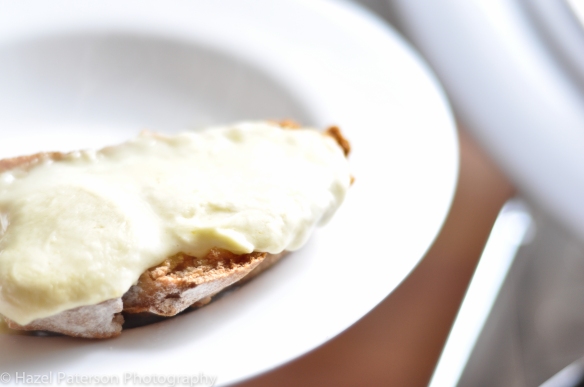 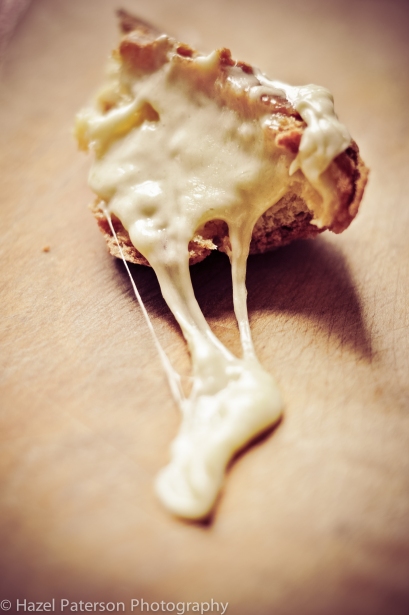 still can't believe I made mozzarella so easily!

A quick shout out on Twitter for suggestions for the leftover whey brought a resounding call for ricotta.  Another quick look online for a really simple method resulted in me finding this method which seemed by far the easiest.

The remaining whey was strained through a coffee filter and left to drip in the fridge before being turned out onto a board. 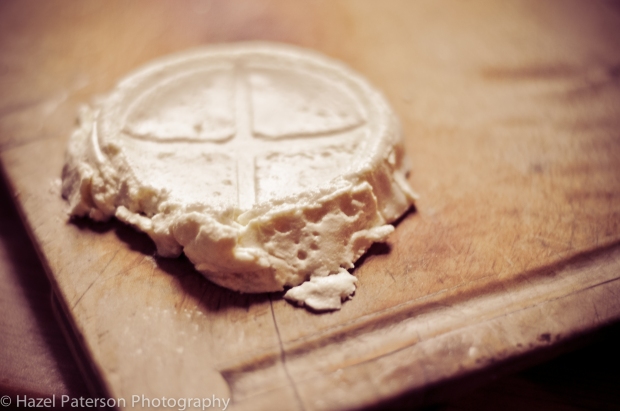 I really couldn’t wait to try the ricotta, I wasn’t disappointed. I guess I’m used to bland, mass produced stuff because the flavour really took me by surprise – there was so much of it!  I was now really excited about my bumbling foray into the world of home cheese making. 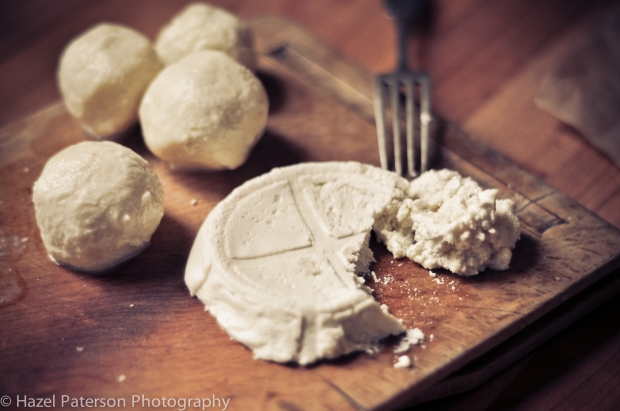 So now I had my beautiful cheeses I needed some pizza dough to showcase them on.  I made a batch of plain and polenta flour dough using 650ml of the leftover whey.  I hadn’t intended to use polenta flour but I hardly had any other flour so substituted it in and from now on I will always do this as it was amazing!  It was about 1/3 polenta and made for a beautiful golden dough with great texture.  Fingers were crossed whilst the pizzas cooked that the mozzarella behaved as it should… 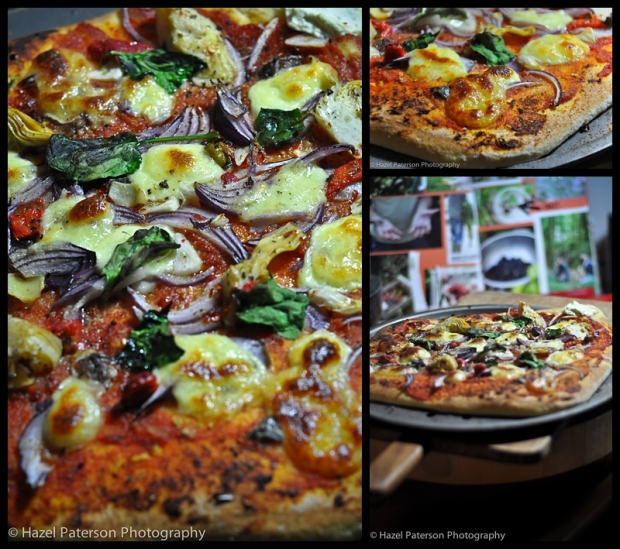 It worked perfectly! The mozzarella melted and oozed and developed a lovely brown crust and most importantly it tasted wonderful, I was so happy!

I then made a polenta and bread flour whey loaf…

This loaf was eaten almost immediately topped with salsa verde from The Good Fork’s deli box and was seriously good!

So what to do with the rest of the whey? I still had about 2 pints of it left.  Another shout out on Twitter went out.  I was told by @pukkapaki that whey is wonderful for the skin and hair so I made a homemade face pack and added a ladle of whey. 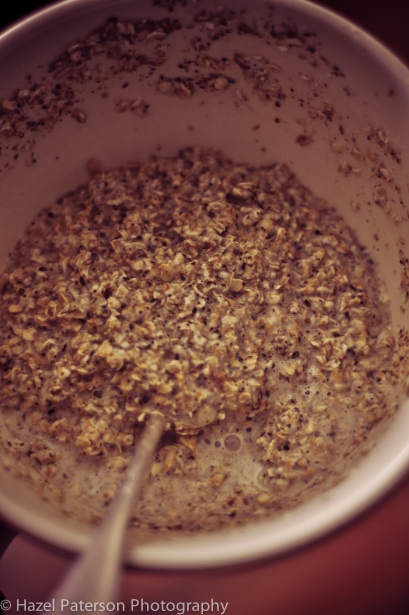 Just mix them all and add more oats until you get a consistency you like then apply to a clean face and leave on for 10 – 15 minutes then remove with a warm cloth.  I’ve been so impressed with the effect that its had on my skin that I’m also using this as a cleanser morning and night as the porridge oats gently exfoliate the skin.  All of these wonderful beauty tips fall on deaf ears for my fella though who just calls it “that hippy shit in a bowl”.

*Update: from this morning (3 days later)

Glen: I wish you’d stop washing your face with porridge the bits get everywhere.

Me: It’s not porridge its a homemade face pack and cleanser dear.

Glen: It’s porridge with tea bags in it, you are essentially washing your face with breakfast.

Well he does have a point there but my skin is so soft and my rosacea is clearing up so breakfast face-washing will continue!*

I still had some more whey left so I decided to try Carl Legge’s suggestion of using it to lacto ferment vegetables and I gave Kimchee making a go.  It’s still fermenting away though so I’ll do a separate post on this when it’s ready.  The final bit of whey has gone to my chickens as a bit of a treat as it helps keep their eggshells hard and is a good all round tonic for poultry.

So from 2 litres of raw milk (which cost £2.40 delivered to my door) I made the most meltingly wonderful mozzarella, the best ricotta I’ve ever tasted, 2 wonderful pizzas, a loaf of delicious bread, lots of face pack/skin cleanser, Kimchee and a special dinner for the chickens, not bad going really.

*Thanks for all the lovely messages on Twitter/Facebook/here about raw milk, I am updating this post with a list of dairies (cow,sheep,goat) that offer raw milk, if you know any please let me know so I can add them*

20 thoughts on “Raw Milk – homemade mozzarella, ricotta and lots of other things!”