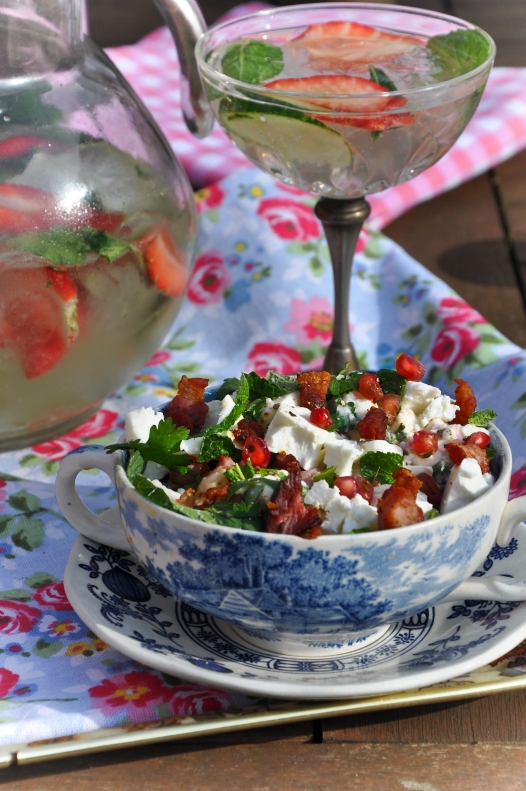 Last November I headed off to The BBC Good Food Show in Birmingham where I was able to sample Womersley Food‘s infused vinegars.  I was photographing the show for Great Food Magazine so promised the lovely guys on the stand that I would be back to buy a bottle of their Golden Raspberry and Apache Chilli Vinegar once I was done.  Alas I got waylaid  *ahem*  at the Compass Box Whisky stand and ran out of time (lost all sense of direction).  Head honcho at Womersley is Rupert, he’s one of those lovely people on Twitter who always takes the time to chat to you and reply to your messages and well worth a follow if you use it.  Anyway, lovely Rupert very kindly sent me a bottle of the Golden Raspberry and Apache Chilli along with his Lime, Black Pepper and Lavender vinegars to play with.

Last night turned out to be a bit of a late one involving rather large amounts of wine and beer. Such indulgence combined with an early morning walk to the train station to pop an equally hungover mother-in-law on the train home had left me feeling somewhat fragile.  Normally at this point I reach for an emergency bacon sandwich but the sun was shining and I had my Womersley Vinegars to play with…perfect!

Creamy, salty feta and smoky bacon are fantastic together but throw some fresh zingy herbs into the mix, a nice hum from the red onion and the amazing sweetness and kick of the vinegar and it turns this from something nice to something really, really good.  My fella is not a fan of salads at all and has proclaimed it “seriously tasty”, from him thats pretty high praise indeed!  If you needed any more reasons to give it a go then I should mention that cheese, bacon and chilli are a sure fire hangover cure too…