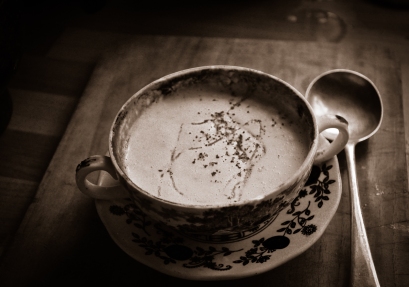 Someone said that the difference between Twitter and Facebook is that whilst Twitter makes you realise that there are loads of like minded people out there, Facebook makes you realise how different to you most of your friends are.  One of my favourite things about using Twitter is connecting/following/stalking/getting inspired by other people who share the passion for food as I do and I recently was introduced (on Twitter obviously) to @GlobalHarvest01.  I had planned on finding him at the BBC Good Food show but got somewhat waylaid by Compass Box Whisky and things were a little fuzzy after that. So, David Mason from Global Harvest being incredibly passionate about his wild pollens and being a really nice chap sent me a sample of each of his Wild Fennel and Wild Dill pollens to play with.

I have always been a fan of using the flower heads of fennel and dill in my cooking but had never thought about just using the dry pollen which has the really pure, intense flavour of its plant. Having virtually mugged the postman for them this morning (and scaring an elderly neighbour who was just posting a Christmas card through our letterbox)  I fancied a Jerusalem Artichoke veloutè as the experimental vehicle as I wanted to play around with some other ingredients too.  I decided upon the following core: Jerusalem Artichoke veloutè, Sweet Chestnut Honey, Truffle oil, the Fennel and Dill pollens.

For the veloutè I used:

Peel and chop the artichokes (pop them in lemony water to stop them turning brown whilst doing this) then add them to a pan with a knob of butter and sauté gently until soft and starting to caramelise. Add the chicken stock, and milk, bring back to just boiling then remove from heat and using a stick blender puree until all the artichoke lumps have completely gone, pass through a sieve then season to taste and blend again this time making sure you get plenty of air into the mix and the liquid is light and frothy. Thats my really simple version anyway.

Then the fun of playing with the different flavour combinations.

I tried quite a few different variations of the 4 toppings to the earthy, frothy loveliness of the veloutè, for me the winners were the Truffle oil and Fennel pollen and the Sweet Chestnut honey drizzle and Dill pollen.

So that was today’s experiment. David assures me that the Fennel pollen is incredible when combined with a chocolate ganache so will be having a play with that too and the Dill pollen is screaming out for a cured salmon partnership so thats on the list too as is a gin based cocktail!